Everything on Earth Is in the Air

by Gregory Mone
The incredibly diverse mix of molecules and particles that we call air has a history stretching back to 4.5 billion years ago, when space rocks and planetesimals bombarded the still-forming Earth. As those objects collided, they released a thick soup of carbon dioxide and nitrogen gases. Later, other kinds of meteorites and comets, vaporizing on impact, brought water to our planet, along with additional carbon and nitrogen. Volcanic eruptions then began pumping steam and still more gas out of the young planet’s interior. As the eons passed, most of the carbon dioxide was absorbed into carbonate rocks , and Earth’s atmosphere, which started out 10 to 20 times as thick as it is today, gradually thinned.

Even then, the air was far from the oxygen-rich, life-sustaining stuff we enjoy today. About 2.7 billion years ago, photosynthetic algae in the oceans started making their mark, taking in carbon dioxide as fuel and sending the by-product—oxygen—skyward. The sun’s ultraviolet rays split some of these oxygen molecules, and the freed elemental oxygen combined with normal oxygen to create ozone. Over time, the new molecules piled up and formed the ozone layer, a natural sunscreen floating a few tens of miles above the ground. Shielded from harmful UV rays, which would otherwise eat away at DNA, plant life thrived. More plants meant more photosynthesis and still more oxygen in the atmosphere . Eventually, the atmosphere contained enough oxygen and high-altitude ozone to sustain air-breathing life as we now know it. 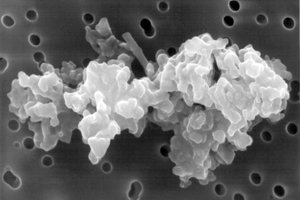 As Earth’s land and seas became more crowded, so, too, did the air. The atmosphere consists primarily of 78 percent nitrogen, 21 percent oxygen, a highly variable smattering of water vapor, and trace amounts of argon, carbon dioxide, and other gases. Plants, animals, and especially humans add their own distinctive chemical imprints on top of that bulk composition. There are the usual suspects—excess carbon dioxide, carbon monoxide, sulfur dioxide, nitrogen oxides, soot, and lead produced by human activity. There is also a long list of other pollutants: Cars, boats, wood-­burning fireplaces, and other sources add more than 250,000 tons of cancer-­causing formaldehyde each year. Home cooking and heating contribute to the 375,000 tons of benzene, another carcinogen, that Americans release into the air each year. Agricultural operations in the United States alone emit more than 2 million tons of ammonia. Even water vapor can contribute to pollution. Additional moisture near coal-burning power plants accelerates the conversion of sulfur dioxide fumes into sulfuric acid, increasing acid rain in the area.

“We’re breathing in this soup of stuff that is not the dominant part of our atmosphere but present in sizable quantities,” says environmental engineering professor William Nazaroff of the University of California at Berkeley. “There’s a lot we understand, and there’s an enormous amount we don’t understand about this wonderful and complex system.”

Anything released into the atmosphere spreads quickly because air is constantly on the move. The sun’s warming radiation drives circulation from the equator to the subtropics. Temperature and pressure variations power winds and storms, from minor eddies to angry funnel clouds. On a global scale, the heating of atmospheric molecules causes the lower atmosphere, or troposphere, to expand and stretch higher during the day; it then settles back down as it cools at night. At the smallest level, air molecules continuously jostle against one another at hundreds of miles per hour, ricocheting like billiard balls. In a matter of weeks, the molecules in any given volume of air will circumnavigate the globe. After a few years, the original molecules will be evenly distributed throughout the lower atmosphere.

To put a human face on this: When Julius Caesar exhaled his last breath, he bequeathed approximately 1022 molecules to the atmosphere around him. Air leaving the lungs is 78 percent nitrogen, 16 percent oxygen, and 4 percent carbon dioxide—depleted in oxygen and enriched more than a hundredfold in carbon dioxide compared with what went in, due to human metabolism. Some of the carbon dioxide probably got trapped and digested by plants in a nearby garden, but the vast majority of the exhaled molecules began to fan out over an ever-widening area. Within a decade, that breath had dispersed completely around Earth, and most of it is still in circulation. Odds are, at least one of the molecules that Caesar (or Mozart or Martin Luther King, for that matter) relinquished when he died is flowing into your lungs as you read these lines.

Air’s eternal cycling quality does not apply to many pollutants and organic compounds that are broken down by chemical reactions before they can complete round-the-world jaunts. (For that reason you will also not inhale any alcohol vapors from Caesar’s last glass of wine.) Still, a good number of noxious chemicals can hang around long enough to have serious effects. Recent studies show that emissions from ships crossing the Atlantic, forest fires in Canada, and factories in Russia have all made their way to the North Pole, where they generate a warming haze of sulfates, ammonia, soot, and nitrates. Renyi Zhang, an atmospheric scientist at Texas A&M University, has found that prevailing winds carry soot and sulfates from factories in China and India out thousands of miles over the Pacific. Computer modeling and satellite observations suggest that these tiny particles can increase storm-cloud cover over certain regions of the North Pacific by 20 to 50 percent, enough to alter storm tracks in some cases. “This is going to have a major impact on global weather,” Zhang says. There are also upsides to air’s restless movements. Many plants, including cereal grains like corn and wheat, depend on wind to spread their pollen. Dust from the Sahara brings surprising gifts. Wafting over the Atlantic, it may have lessened the intensity of the 2006 hurricane season. It also seems to carry crucial mineral nutrients to the Amazon’s rain forests.

Indoors, air takes on a whole additional range of qualities. Air in the average home contains chlorine gas from household cleaning products, fragments of cockroaches and other bugs, and microscopic dust mites kicked up from carpets or couches. While changing our clothes, we dispatch 100,000,000 inhalable microbes into the air per minute. After flooding, indoor mold can become an irritating, or even deadly, part of the air.

The workplace is hardly pristine, either. A typical cubic meter of office air contains several hundred fungal spores, 89 micrograms of ethanol, 42 of acetone, 16 of formaldehyde, half a microgram of chloroform, and the by-products of human flatulence, a major source of methane and hydrogen sulfide.

There may be benefits to breathing in such a hodgepodge of stuff, according to Eoin Brodie, a microbiologist at the Lawrence Berkeley National Laboratory in California. He is part of a team cataloging the microbial diversity of U.S. air—in which the scientists have picked up, among other things, very small concentrations of bacteria related to anthrax. Brodie suspects that low-level exposure to other microbes may fortify our immune systems. “It may actually be protecting us,” he says.

And some impurities in the air are more than compensated for by the atmosphere’s protective qualities. Air incinerates all but the biggest space rocks before they pummel our planet; the vast majority never even make it past the stratosphere. The trade-off is a constant rain of cosmic dust. Every year, statistically speaking, you will inhale three particles shorn off a meteoroid as it burned through Earth’s atmosphere.

Air connects us to the most distant reaches of this planet, to all the life that has ever lived, even to the universe beyond. “If it exists on Earth,” says McGill University chemist Joe Schwarcz, “there will be some remnant of it in the air.”